The fiftieth anniversary Conference of Irish Geographers, took place at Maynooth University, (close to Dublin, in County Kildare) from 10-12thMay 2018. In response to a call for papers for a themed session with the title: Between Nature and Culture, Land and Sea: Spatial Practices at the Coast, Ruth Brennan (Centre for Environmental Humanities, Trinity College Dublin) and I convened a double session with eight papers[1]presented to a lively audience on the last day of the conference. We were particularly interested in papers which viewed coasts and coastlines as boundary spaces and explored ways in which natural and cultural values are contested and negotiated at the coast. With this thematic focus, the session built on recent work on cultural geographies of coastal change (e.g. Walsh & Döring 2018) and was informed by a broader concern to bring together perspectives from cultural geography and the environmental humanities.

The first paper, by Frances Rylands and colleagues from the interdisciplinary Cultural Values of Coastlines project at University College Dublin explored the concept of emotional ecologies as a means of incorporating cultural values in policy-making at the coast. Her paper addressed the question of how nature-culture relations can be narrated at the coast, working with through practices of story-telling and story-mapping. Drawing on the Lorimer’s Wildlife in the Anthropocene (2015), she spoke of the non-human charisma of seals and their role as digital personalities in the communication of particular images of nature at the coast. Her paper highlighted the importance of developing and articulating an ethic of care in relation to the marine environment and the potential role of story-telling in articulating otherwise intangible and difficult to grasp emotional responses and cultural values.

The second paper, by Liam Carr of National University of Ireland Galway, critically examined current developments with regard to marine spatial planning in the Irish context. He called for geographers to engage constructively with Irish Government’s efforts to prepare a first generation of marine spatial plans, arguing that geographers have many of the skillsets needed for developing a substantial evidence base to support planning at sea. In particular, there is a risk that cultural values are not given due attention due to a lack of quantifiable information. He suggested that Ireland, as an island nation, should probably have been ‘planning our lives around the sea’ much earlier and that it is imperative not to ‘miss the boat’ on this issue now. His review, however, also highlighted the extent of fragmentation in marine policy-making and governance in Ireland, demonstrating that fragmentation of responsibilities for the marine is also an issue in small countries with centralised governance structures. Taking a more optimistic view, there may be more possibilities for researchers to take advantage of current windows of opportunity before MSP competences and ways of working become routinized within specific institutional and policy arenas.

Following on directly from the previous presentation, Desiree Farrell, also of NUI Galway presented the results of surveys with stakeholders in marine governance which sought to elicit intrinsic values associated with the marine environment. Her research followed a Q-methodology approach and demonstrated a means of generating quantifiable data with respect to cultural values at sea. Through her empirical analysis, she identified three distinct categories of stakeholder: Nature Collaborators, Sustainability Seekers, and Nature Technicians, each informed by distinct paradigms of environmental thought. This research complements recent studies qualitative studies which have similarly sought to identify landscape narratives at the coast (see Köpsel et al 2017). The published version of Desiree’s paper is available here. 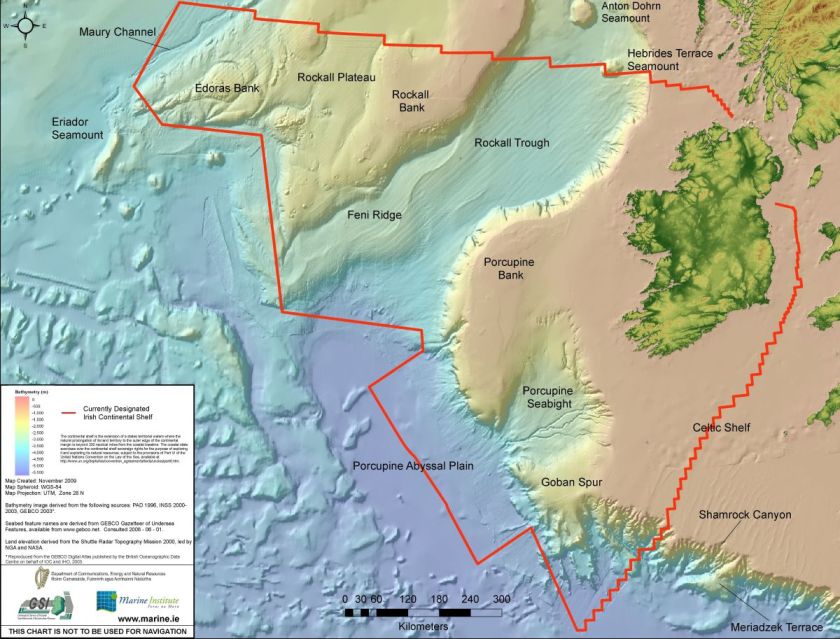 Ireland’s Marine Space: Ireland’s marine territory extends far beyond the island’s coastline, encompassing an area of approximately 880,000 km2, an area more than 10 times that of the land mass of the island. Source: Marine Institute.

The final paper of the first session was presented by Christopher Phillips, a doctoral researcher at the ICARUS climate change research centre at Maynooth University. His paper presented the proposed focus for his PhD research, concerned with the impacts of coastal erosion of a popular beach area and the associated loss of place at the village of Courtown in Wexford. Through participatory GIS and walking interview methods his research will seek to examine how the community of Courtown has responded and adapted to this process of environmental change. His research is embedded within a social-ecological systems framework.

The first paper in the second session was given by Sybil Berne, a planning practitioner with consultants MacCabe Durney Barnes. Her paper reported on research conducted for her master’s thesis in Marine Spatial Planning at Ulster University. Continuing the theme of place attachment, she examined the opposition of an Irish-speaking community (An Spideal) to a marine energy development in Galway Bay. Her research demonstrated how opposition emerged primarily from a sense of not being heard, not having a voice, and an intangible concern for the vulnerability of their place identity. Issues relating to the proposed development itself were less relevant. She highlighted the importance of engagement with local communities and the need to take the time to understand the importance, however intangible, of place belonging and identity. Drawing on her work as a practicing planner, however, she also spoke to the pragmatic challenges involved in translating cultural and place-based values into ‘evidence’ acceptable to the planning process.

Following on from this, Jack McCarthy, a doctoral researcher based at University College Dublin and Teagasc (national agricultural research and development agency) presented his research on coastal farmland knowledges and the management of areas of hillside commonage lands in the west of Ireland. Drawing primarily on qualitative interviews with hill sheep farmers and other local actors, he examined the dynamics of individual and group interests in relation to the management of this commons. Issues of boundary-drawing come to the fore, due to attempts to extend the area the commonage and number of farmers included within the group scheme. These practices of boundary-drawing and interaction are informed by historical relationships, pragmatic strategies and specific coastal knowledges. His research highlights the significance of micro-scale power-dynamics and experiential knowledges in the management of coastal resources at the local scale.

Following this, my own paper (Cormac Walsh, University of Hamburg) focussed on the negotiation of natural and cultural values and space and place at the coast, through a case study of the Danish Wadden Sea National Park. Whereas the critical political ecology literature, and current practices in neighbouring Germany in particular, attest to the creation of spaces for nature set apart from society, through the formation of national parks, this particular case points to an alternative approach, whereby the Wadden Sea coastal environment is understood as a ‘peopled land- and seascape’ (Shackeroff et al 2009), a regional commons, rather than a space set aside for nature. Within this context, much effort is placed on shifting mind-sets regarding the need to allow natural processes to follow their course and the importance of protecting the ecology of the landscape.  The paper emphasised the need for an understanding of nature conservation and coastal management as situated practices, embedded in specific socio-cultural contexts.

The final paper of the day, by Rory Rowan of the University of Zurich shifted our horizons to the world of geopolitics and practices of state territorialisation at the South China Sea. He reported on the engagement of the Chinese government in material practices of territorialisation through the creation of heavily militarised artificial islands in waters beyond the formal jurisdiction of the Chinese state. These practices are rationalised through reference to the historical sphere of influence of China, indicating the role of particular socio-spatial imaginaries and historical narratives of state-building in this power-laden context. His paper provided a reminder of the ways in which coastal and marine spaces can become entangled in geopolitical projects on the global stage.

Due to some exemplary Tibetan-gong-assisted-time-keeping, there was sufficient time for in-depth discussion in both sessions, focussing on conceptual, methodological and pragmatic issues. Almost all of the papers shared a common concern with the articulation and communication of place-based values and their relevance for policy-making both at land and at sea. Whereas for some presenters, values were understood as measurable attributes of specific stakeholders or individuals, for others they were understood as emergent properties of processes of dialogue and interaction among stakeholders and local communities. The papers demonstrated a diversity of approaches to engaging both critically and constructively with issues of research and policy relevance at the coast.

The response to the call for papers and the quality of the presentations and discussion demonstrated the current vitality of this field of research in the Irish context (broadly defined). I total, seven universities were represented. For two of their presenters, it was their first academic conference papers. We would never had known, if we weren’t told! Well done Christopher and Sybil! There is every reason for the confidence that cultural geographies of the coast and marine will feature prominently at this conference in future years, as elsewhere. The full list of papers from the two sessions is provided below:

[1]A ninth paper by Anna Ryan of University of Limerick was withdrawn at short notice due to illness.

One thought on “Between Nature and Culture, Land and Sea: Spatial Practices at the Coast: A Conference Report”