The Marine Coastal Cultures Network convened a thematic session at a two-day workshop organized by the Strategy Group Marine Social Science and Humanities within the German Marine Research Consortium (KDM) on May 24-25, 2018 at Kiel University. The workshop was hosted by the research group „Social Dynamics in Marine and Coastal Areas“ (Kiel University, Institute of Geography). The full program can be found here. As an introduction to our session, Cormac Walsh took up the opportunity to introduce the group to the MCC network and blog (this website), present the brand new virtual bookshelf and invite participants to contribute.

This was followed by a short conceptual input on more-than-human political ecologies, building on ethnographic material from my work on coastal protection in Aotearoa New Zealand. I zoomed in on volunteer dune restoration which is, in accordance with national coastal policy, framed as using “natural defences”. I argued that the recreation of natural dunes by volunteer Coast Care groups relies on various human and more-than-human practices and things. Native dune plants are part of a complex assemblage of sociomaterial practices, actors and objects, and their availability for Coast Care is the result of successful experiments with cultivating native plants in greenhouses.

Furthermore, Coast Care implies permanent care and maintenance work, planting certain species while removing or excluding others – with enclosures and fences, poison, traps, weeding and other measures. Coast Carers restore an assemblage of animals and plants defined as native. However, the native plant is a historically contingent and natural-cultural category. Those who argue that volunteer dune restoration works with nature are simplifying a complex field by drawing a simple distinction between nature and society. In order to promote their political objective – to provide alternatives to hard protection – and to link it to the larger international discourse on nature-based solutions, they engage in a “strategic naturalizing” of nature (cf. Thompson 2001).

A more-than-human approach understands nature as the outcome of the sort of human and more-than-human practices observed in the field (Hinchliffe 2007). By looking at the entanglements of nature and society, instead of a strict separation, the focus is shifting: to the material processes and social context, to the question which natural environments are preferred and by whom, and to taking responsibility for the answers that are given to these questions. Because the assemblage of nature is a process, intervention is possible and how to engage in the “making of better natures is […] an empirical and political question” (Hinchliffe 2007, 191). A first step towards sustainable more-than-human assemblages of the coast is then to make visible how human and more-than-human actors, practices and objects are gathered and work together – and against each other.

Mara Ort, member of the artec Sustainability Research Center and PhD candidate with the International Research Training Group INTERCOAST, presented insights from her study on the production of space at the Aotearoa New Zealand coastline. Mara’s project addresses how different constructions of coastal space influence planning and development processes of coastal infrastructures. Her approach includes interviews, participatory mapping and document analysis across three case studies: wharf redevelopment in Auckland, runway extension at Wellington Airport, and dredging activities for the Port of Tauranga at the Bay of Plenty coast.

While the New Zealand Coastal Policy Statement 2010 gives regional and territorial authorities the mandate to preserve the natural character of the coast, there are conflicting understandings among councils and other coastal management institutions as to how people and the environment relate. The Department of Conservation, the federal nature protection agency, sees people in conflict with nature, whereas Tangata Whenua (local groups of indigenous Maori) put forward an understanding of people as a part of nature. This is in tension with hegemonic understandings of planning, which perceive space mostly in terms of physical structures. In the discussion of her empirical findings, Mara therefore drew on Stephenson’s  (2010) call to take people-place relationships into account. In their legal challenge to the controversial dredging of shipping channels in Tauranga Harbour (Te Awanui), local Maori groups have framed the harbour as a “garden in the sea” that nourishes history, traditions, identities and mana, as expressed in the proverb “Ko au te Moana, ko te Moana ko au”(I am the sea, the sea is me). This shows that contrary to the hegemonic production of space in planning, there are multiple definitions and meanings of the coast which are expressed in multifold, potentially conflicting practices such as the collection of seafood, recreational use (surfing), or dredging, constructing, and reclaiming.

Cormac Walsh‘s  input “Negotiating Spaces of Nature and Culture at the Wadden Sea” drew a comparison between the Schleswig-Holstein Wadden Sea National Park in northern Germany and the neighbouring Danish Wadden Sea National Park in southern Danmark. Through qualitative interviews and interpretative policy analysis, Cormac explores how the relationships between society and the sea, nature and culture are articulated and framed in the context of the two national parks, which are characterized by contrasting nature-culture imaginaries, metageographies, and governance cultures.

Do National Parks constitute a form of heterotopia; ‘natural spaces’ set aside from society or should they rather be viewed as instruments for sustainable regional development (Foucault 1986, Kupper 2012, Mose 2007)? This question is answered differently in the two national contexts. In Germany, the objective of the Wadden Sea National Park is to allow natural processes to proceed in an undisturbed manner, a practice which leads to sharp boundaries that exclude hinterland coast and inhabited islands. The German Wadden Sea is understood as a natural landscape. In contrast, the Danish National Park is based on the “use, protection and development in sustainable interaction between people and nature”. Here, the Wadden Sea is perceived as a regional commons and a peopled landscape. 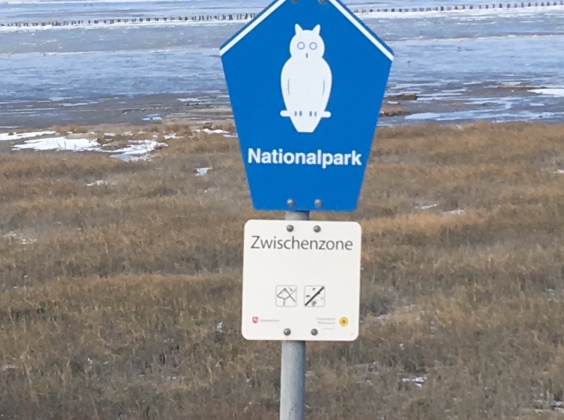 The two case studies demonstrate the need for an understanding of coastal management and nature conservation as situated practices, embedded within specific socio-cultural contexts. Through the designation and management of areas of nature protection at the coast and at sea, nature-culture relations are renegotiated and reframed with significant implications for broader processes of coastal management, nature conservation and regional development. Yet the relationships between protected areas and their coastal and marine hinterlands may be interpreted and articulated in very different ways.

Jane Clarke from the School Of Natural And Built Environment at Queen’s University Belfast presented her ongoing research on the transition to a low carbon economy in English and Scottish marine spatial planning (MSP). Jane’s research responds to calls for a more critical approach to MSP evaluation, recognizing both the winners and losers of MSP in practice (Flannery et al. 2016). It takes place against the background of complex spatially and temporally variable uses of the UK’s marine areas in combination with a “horrendogram” (Boyes and Elliot 2014) of marine policy and legislations that leads to fragmented and sectorally focused marine governance. Since 2009, the UK has required the implementation of MSP, defining high level objectives and seeking to eventually establish an ecosystem based approach to managing their waters. The project will investigate if, or how the transition to low carbon economies, which is one of four high level objectives of UK MSP, is occurring across the English and Scottish marine areas.

The project uses semi-structured interviews and thematic analysis and builds on concepts from the Science and Technology Studies literature, including Star and Griesemer’s (1989) conceptualisation of boundary objects facilitating collaboration despite heterogeneity, and Thomas Gieryn’s  (1983) concept of boundary work in rhetorical actions between scientists and non-scientists. While empirical research using the boundary objects concept – such as Tamara Metze’s (2014) study of Fracking in Dutch policy – often has a tendency to focus on their facilitative features and “interpretative flexibility” (Bijker 1995), Jane’s practice-based approach to studying the negotiations over the transition to low carbon economies also puts emphasis on unequal power relations (Oswick & Robertson 2006) and  hierarchy of knowledge boundaries (Carlile 2002).

The research presented in this session demonstrated the value of qualitative empirical approaches for the environmental social sciences. Overall, the panel nicely featured the fundamental role of concept work for understanding coastal management issues. At the ontological level, there have been questions raised such: What is nature/natural? How do people and environments relate? What does transition mean? Interviews, participant observation and document analyses are used to investigate how different framings are enacted in discourse and practice (Mol, 2002). This way, the papers are able to identify hegemonic understandings of space, native nature, landscape, or sustainability, as well as to explore alternative approaches put forward by less powerful actors.